Let me start this article by using a few numbers to paint a bit of context: It is estimated that about one third of the entire US population is suffering from chronic pain. That is a staggering number in excess of 100 million people1.

So perhaps it should come as no surprise that US pharmacies fill enough prescriptions to give more than every adult their own daily supply of opioids2!

The CDC reports that in 2019 more than 70,000 people died of a drug overdose, and the vast majority of these deaths were due to opioids (see Graphic 1 below).
To provide the reader with some more context: In the entire Vietnam War, 58,220 US soldiers lost their lives. Or here in Berkeley, California, the stadium that is home to the California Bears has a capacity of about 62,000 people. So many deaths, and in many states these numbers are still rising. However, not in every state: States with legal access to cannabis have seen a drop of up to 25% of drug-related deaths5.

If we were to apply this trend nationally it would mean that roughly 17,500 people may be saved by a single plant.

It seems to me that we are a country with a lot of people in pain. And it is a stubborn kind of pain that persists and resists conventional treatment options.

It seems that the current approach relying heavily on opioids has not worked very well. Cannabinoid-based or combination therapies can offer real alternative and not just from a harm-reduction perspective.

The need for alternative pain-relief therapies is enormous, and to date fifteen clinical trials have been published examining the effects of cannabinoid-based therapeutics in the treatment of chronic pain, according to the online platform CannaKeys 360.

Yet US public health officials tasked with the development of policies addressing this very real American tragedy cite the lack of practical, clinical guidance based on the typical gold standard of meta-analyses of double-blind placebo-controlled trials as reason not to move forward with implementing much-needed innovation and change utilizing cannabinoid-based therapeutics.

However, rather than waiting to address this gap between the need and still-developing critical clinical knowledge that is acceptable to the policy-making consensus, in November 2020 a multidisciplinary team from twenty-eight Canadian and US-based academic and research institutions—including experts in the cannabinoid health sciences such as Dustin Sulak, DO, Robert Sealey, MD, Ziva D. Cooper PhD, and Sana-Ara Ahmed, MD (for a complete list see endnotes)—published a solution to this malignant problem in The Journal of Clinical Practice entitled “Consensus‐Based Recommendations for Titrating Cannabinoids and Tapering Opioids for Chronic Pain Control.” In it they report the results of a novel approach utilizing a modified Delphi technique to introduce and titrate cannabinoids while weaning chronic-pain patients from opioid-based analgesics.

To ultimate arrive at a practical treatment algorithm these experts applied the Delphi method to answers 4 basic and clinically relevant questions:

1. Which chronic pain patients on opioids are possible candidates and which ought to be contraindicated (i.e. should not be given cannabinoid-based therapeutics)?

2. What types of cannabis constituents ought to be used; when should each be given (time of day); at what dosages; and at what dosage progressions?

3. After what point of introducing cannabinoids should the process of weaning opioids begin and what does this process looks like as far as specific dosage reduction is concerned?

4. And, lastly what would be the optimal way to monitor patient progress regarding achieving effective analgesia while reducing any adverse effects potential?

The resulting treatment algorithm was expressed in five distinct phases (for more details on each phase, see the text below Graphic 2). 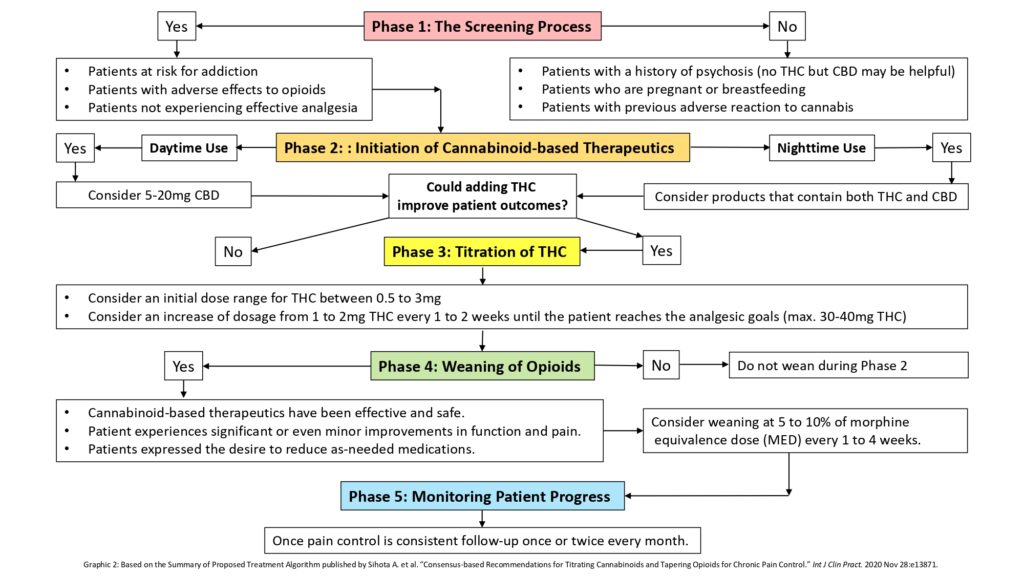 Phase: The Screening Process (of chronic pain patients on opioids)

No age restriction was recommended for either THC or CBD, but the use of THC for children was paired with the notion that it should be carefully considered due to the still-growing nervous system (until the age of 25) and THC’s potential impact on it. However, the consensus was that if a pediatric patient was already on opioids, the introduction of cannabinoids ought not to be a contraindication.

Based on clinical observations in other patient populations, a high dose of CBD was considered safe for children.

Preferred method of administration was ingestion and the utilization of oil-based extracts (incl. sublingual tinctures) or capsules, which would ideally be composed of standardized plant constituents. As an exception, in cases of breakthrough pain, vaporized cannabis flower utilizing a medically approved device was recommended.

Nighttime Use: Consider products that contain both THC and CBD.

Consider an initial daily dose range for THC between 0.5 and 3mg.

Consider a daily increase in dosage of 1 to 2mg THC every 1 to 2 weeks until the patient reaches the analgesic goals (max. 30-40mg THC daily).

Also, further cannabinoid titration ought to be stopped if:

Is weaning of opioids an option?

Consider weaning at 5 to 10% of morphine equivalence dose (MED) every 1 to 4 weeks.

Once pain control is consistent, follow up once or twice every month.

If pain control is consistently achieved, follow up every 3 months to track clinical signs of successful treatment defined by the authors of this trial as:

The authors also make the important point that these consensus-based recommendations ought to take a secondary role after considering each patient’s individual preferences and experiences in addition to each treating physician’s clinical rationale and individual patient assessment. 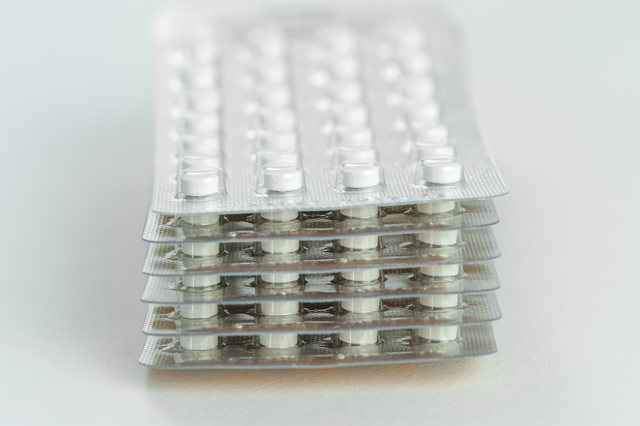 Benzodiazepines are a class of synthetic drugs that combine sedative, hypnotic, relaxing, anticonvulsant and anxiolytic properties used in the… 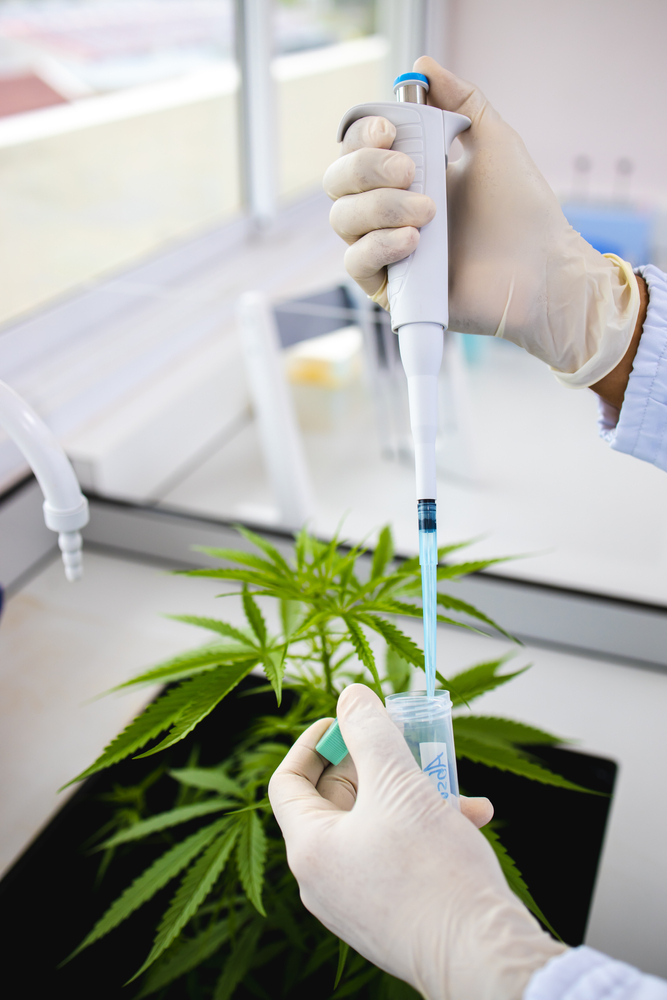 Have you ever heard of phytocannabinoids? Although most people only know THC and CBD, Cannabis has more than 500… 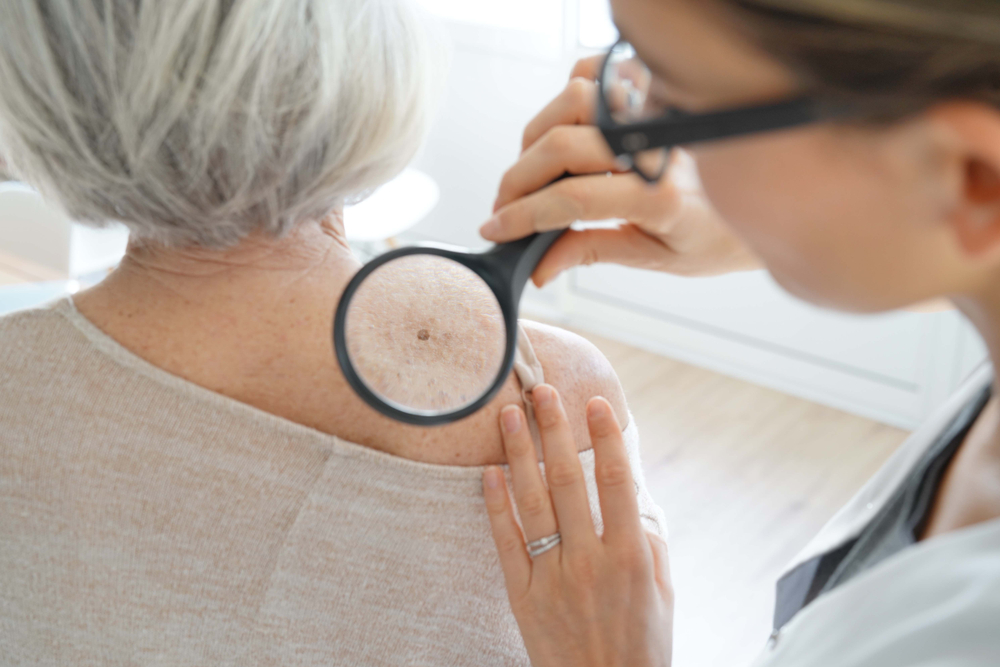 Melanomas are responsible for 75% of deaths from skin cancer, in view of the metastatic capacity of melanoma to…